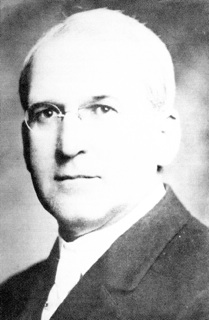 The band was formed in 1927 by Arthur Amsden to perform for civic events and parades.  It performed throughout the year with special programs in the parks of Saginaw in the summer.  A trombonist with the band, William Mertins, was a close friend of Arthur D. Eddy (pictured right) whose family had accumulated a large fortune in the area’s lumber industry.  Mertins was aware that Eddy attended almost every performance of the municipal band.  The ever personable Mertins convinced Mr. Eddy to set aside a portion of the C. K. Eddy Family Memorial Trust to fund the band and provide future generations of Saginaw with free public concerts.  Since then the band had been known as the Saginaw Eddy Band.  Conductor Amsden lived only long enough to see the very first season of the band.

German born Charles Mann was hired to conduct the band in 1928.  Mann had directed bands and orchestras in Europe.  His influence changed the course of the band to a more concert-oriented organization and thus the new moniker of the Saginaw Eddy Concert Band.  Mann left the band in 1931 over a salary dispute with the city, which was providing partial funding and support.

The next conductor was William A. Boos.  He was a former violinist with the Detroit Symphony.  Along with his position as conductor of the SECB, Boos was a teacher in the Saginaw Public Schools.  In 1934 Boos started the Saginaw Civic Symphony and also served as its conductor.  This group evolved into the current Saginaw Bay Symphony Orchestra.  At this time the city supported both groups with finances and facilities.  The Eddy Trust was still the main benefactor of the SECB.  Later the city withdrew financial support from both organizations.  The SECB continued to be solely funded by the Eddy Trust and the Saginaw Civic Symphony went independent and became the Saginaw Symphony Orchestra.

Boos retired from both positions in 1951 and Josef Cherniavsky was selected to conduct both groups.  Over his ten years in Saginaw, Cherniavsky saw the demands of both groups grow to the extent that two conductors were necessary.  Cherniavsky remained with the SSO and William Burnett, the band director at Arthur Hill High School took the SECB for a season.  In 1961 Burnett semi-retired as a music teacher and also as SECB conductor.  James B. Dye, the band director at Saginaw High School, became the conductor of the SECB.   Dye added much to the library of the band with fresh new band compositions and show tunes that delighted the audiences at Ojibway Island Band Shell.  The band performed a regular schedule of 10 Sunday evening concerts beginning on Father’s day each summer.  Dye also recruited area soloists to perform instrumental or vocal features with the band.  The concerts grew into a family event with picnics before the concert a common practice.  At this time the band did not have a “physical home” other than the shell on Ojibway Island.  Rehearsals were on the stage, covered by a canvas roof, on Tuesday and Thursday evenings.  Often the rehearsals would draw audiences of a hundred or so music lovers.  The band would practice in all types of weather, but if it were raining on Sunday evening, the concerts would be canceled.

When Dye retired from the SECB in 1963, Monte Sheedlo was hired to conduct the band. Sheedlo had been a student of Dye’s at Saginaw High School and had recently graduated from Michigan State University with a Music Education degree. The pattern of concerts remained the same with the emphasis being placed on quality band literature. Sheedlo was also a band instructor on the West Side of the state and the distance made directing the SECB a difficult task. Thus, in 1968 Sheedlo resigned from the band to dedicate his time to his teaching position.

The supervisor of music for the Saginaw Public Schools, George W. Anderson, became the next conductor of the SECB. In his 26 years on the podium Anderson promoted the band as a vibrant cultural force in the Mid-Michigan area. He convinced the trustees to increase the band from only 40 musicians to over 60. This increase allowed the band to assume a more traditional concert band instrumentation. Always one for flair, Anderson featured opera overtures, show tunes, soloists, Dixieland bands, and even a band of banjos!  His trademark was a collection of flashy sport coats that he would change at intermission.

Anderson’s position with the school system allowed the band to rehearse at Arthur Hill High School during the week and play concerts in their auditorium in case of rain. The Ojibway Island setting continued for concerts until the mid-seventies when problems with motorcycles and groups of youths began disturbing the peaceful atmosphere. The city and trustees purchased a “showmobile” and presented the concerts in the football stadium at Arthur Hill High School. During Anderson’s tenure, the SECB began playing a special concert prior to the annual Fourth of July fireworks display at Hoyt Park and later in the parking lot of the Treasure Island restaurant.

In the 26 years of Anderson’s leadership the band continued to explore new concepts at the concerts. Area dance groups and established performing musical groups such as the Valley Woodwind Quintet, Flûtée, The New Reformation Band, and barbershop quartets and choirs have performed prior to the concerts, at intermission and with the SECB.

With Anderson’s retirement after the 1993 season, Jim Hargett and Paul Lichau were asked to conduct the band while a conductor search committee sought a new conductor.  Hargett had played in the band for many years and served as the librarian since 1991 and Lichau had played in the band since 1963 and served as the manager for the band since 1980.  The two conductors brought a balance in programming and style to the band.  Emphasis was placed on performing the best in wind band literature as well as the crowd-pleasing marches, show tunes and feature numbers.  At the request of the trustees and the city, the concerts returned to Ojibway Island. Hargett remained until 2012 and Lichau remained through 2014.

In 1995, our sixty-ninth season, the Temple Theatre in downtown Saginaw became our new rehearsal and performance venue. Wonderful acoustics and air conditioning made this a welcome home to the band. A Christmas concert in November was added to our performance schedule this year and has become an annual event for both the SECB and the community.

On our 75th Anniversary in 2001 special guest artists Lynn Klock, The Three Sopranos, Good Company and the Boston Brass along with former musical directors Monte Sheedlo and James Dye were all featured with the band.

In 2014, the SECB migrated from our home on Ojibway Island to the brand new FirstMerit Event park, at 300 Johnson Street. In 2022 the venue became known as the Jolt Credit Union Event Park. This venue offers a beautiful, clean and easily accessible location along with a fantastic stage to show off the band!

2015 to Present: Conductors Heuck and Radtke

Vanessa Heuck became the first female conductor of the Eddy Band in 2015. Vanessa left to pursue a doctorate in conducting following the 2015 summer season. Joseph Radtke was chosen to conduct our 2015 Christmas concert and was permanently hired as musical director in 2016.

Some other significant events for the SECB:

Thanks to the forethought of Mr. Eddy, the SECB continues to be the best entertainment value in the Saginaw Valley!